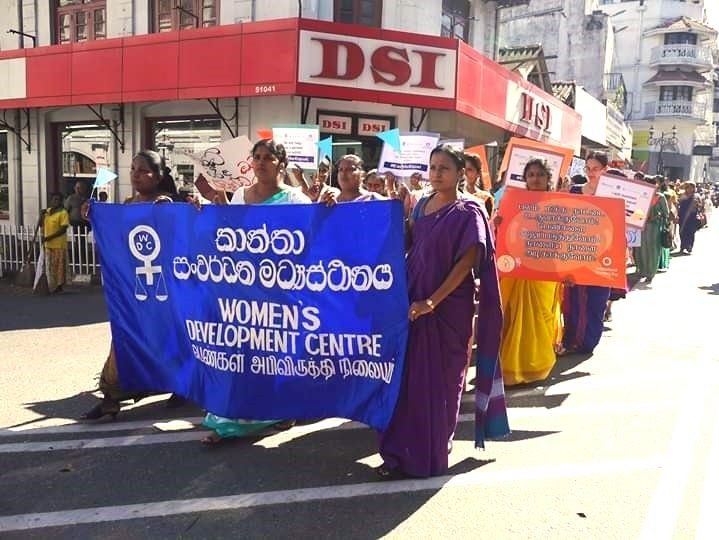 The Women’s Development Centre together in collaboration with other organizations that are working towards women empowerment (the provincial women and children’s desk at Kandy police, Kandy district secretariat) organized the IWD 2020 on 10th of March in Kandy, Sri Lanka. There were 320 attendees including women and girls from Kandy district, police officers, women development officers attached to the 20 divisional secretariat areas and WDC staff. About 30% of the participants were men. Their engagement was significant as they have an important role in ensuring the spread of gender equality messages among the general public.

The program consisted of various activities including a march, a trade exhibition, an awareness session and distribution of assistance for selected women and pregnant mothers.

The march began from the Temple and ended at the Kandy police station. It was led by the women police officers and women and girls held the signs with messages to eliminate violence against women, women’s rights, gender equality and this year’s International Women’s Day theme messages shared by COL.

The product exhibition (women entrepreneurs from Kandy participated of the trade fair) and sales were open the entire day for the participants, general public as well as other officers who work at the police station. This was a good opportunity for women entrepreneurs to build contacts with different stake holders, to get orders from clients, earn an income and enhance their marketing experience.

The awareness session was about the Domestic violence act and how women can access resources for legal provisions in the act in order to minimize violence within the family. The session was done by the Senior Superintendent of Police, Mr. Sudath Masinghe, of the Kandy police station. A few officers in leadership delivered speeches on gender equality and showed videos on gender-based violence in the public transport to raise awareness on this issue.

The program was implemented under the WDC project on empowering women and girls for sustainable livelihood supported by Commonwealth of Learning (COL) GIRLS Inspire Project.