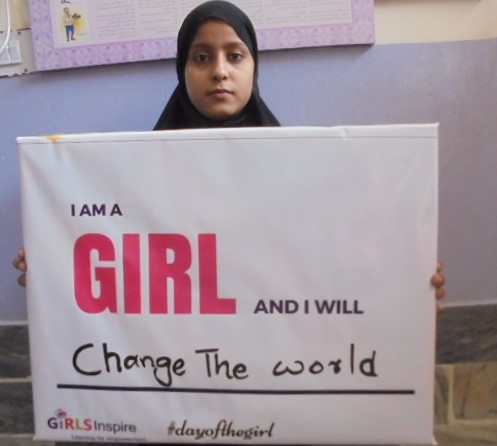 Wednesday 11th October, 2017 marked the fifth anniversary of the UN declared “International Day of the Girl”, recognized to promote empowerment of the approximately 1.1 billion girls around the world. Celebrated with much fanfare by policymakers, activists, celebrities, professionals and most importantly GIRLS worldwide the day highlighted the progress that had been made thus far and reiterated all that remains to be done. The day served as an important reminder of the disproportionate impact issues like conflict or humanitarian crises can have on girls such as rendering the girl victims vulnerable to abhorrent abuses like sexual and physical violence, child marriage, exploitation and trafficking.

SPARC as a child rights organization has had a particular focus on issues pertaining to girls, in particular child early and forced marriage, girls’ vulnerability in impoverished and disadvantaged communities and girls’ education. In order to celebrate the Day of the Girl, SPARC through its Centers for Street Children and Vocational Training Centers engaged in interactive sessions with the girls about girls’ rights and what makes them feel empowered. Prior to the day, the girls were oriented with the significance and global acknowledgement of the International Day of the Girl Child and were subsequently asked to participate in the social media campaign initiated by COL. Girls enthusiastically participated in the activities by sharing their stories of empowerment they had experienced since attending SPARC’s centers, whether it was in the form of learning new skills which could be used gainfully or by experiencing a sense of freedom and self-confidence which was previously unthinkable. The recognition of their abilities by their families and their communities in general was a metric of empowerment in some cases.

As the session progressed the girls were asked to describe their dreams and prospects they envisioned for their future. It was heartening to note that most of the girls’ aspirations included not only pursuing education and employment but also involved pursuing careers in human and social development, particularly for women. This showed that these girls were not just passive recipients of education and training but were promising to actively engage those acquired skills to help their communities and to create a better future for all.   Through their immense resilience, strength and optimism these girls promise to be leaders in the struggle for women empowerment in the years to come.