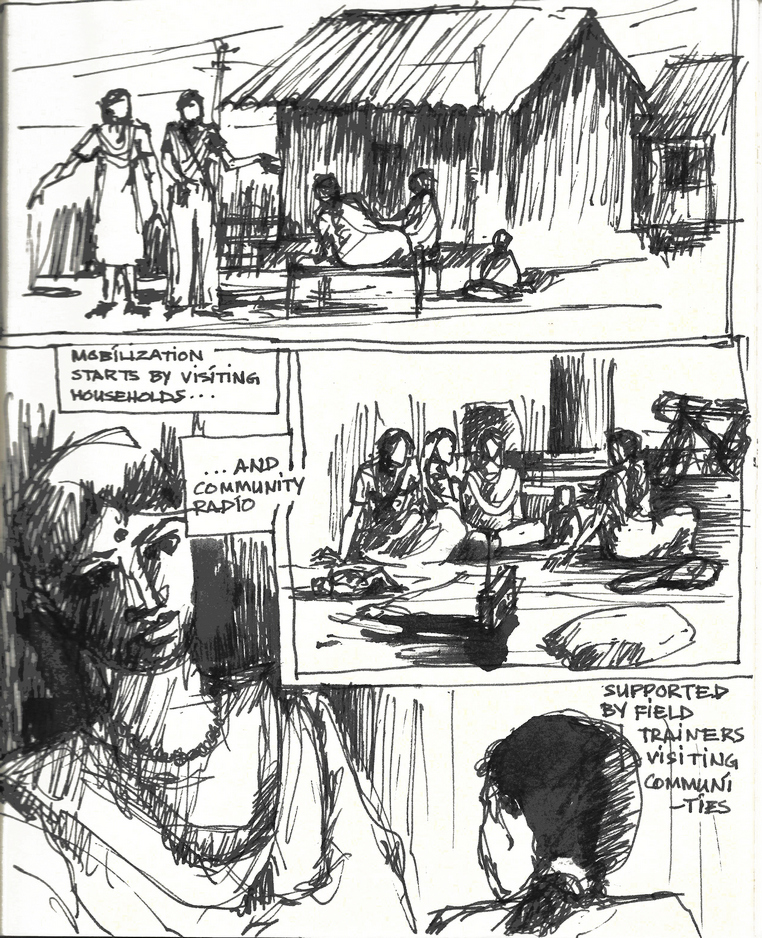 Even before the project took off, we were facing a very important question. We already had done some reconnaissance field work with the communities targeted. Our field teams all came back with one single issue: How do we motivate those, who live for a day at a time? Who have outright rejected our offer of furthering their knowledge and of a better tomorrow?

Our task in hand was to clearly tell the field team what we intended to do and how. The first parameter was to adopt a language where there could not be a scope for misinterpretation or misunderstanding; so we dropped the idea of sopoken or written language altogether. Our only scope was to adopt visual narratives that brings us all to the same understanding of the process and target impact.

The first was to visualize the process and communicate so that linkages between all parameters and all components of the project is understood by having one glimpse. So we mapped the process and its owners first:

The second was to communicate the impact we are seeking and again at just one go:

And the third was to map both the process and impact so that it is easier to understand and motivate ourselves knowing what we are doing is right:

But will this be enough to guide a field team that is operating in such a diverse geographic and social scenario? perhaps not as the diagrams we created is still not broken down in steps. How do we do that so that it is understandable, executable and most importantly motivating. Again, we banked on minimum of spoken and written instructions, but created a comic book that guides us step by step into the process of project implementation:

This has set our project in an unique tune. Our approach is that to tell stories of those who succeed and who don’t; our aim is to inspire by seeing and showing those who rose from every shadow that Child, Early and Forced Marriage (CEFM) could and will cast.