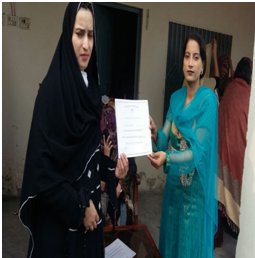 Rukhsana Imran Farooq wife of Choudhry Imran Farooq is a resident of Jatoi City. Her husband suffers from backbone problems due to which he is unemployed and unable to financially support his family. They are Kamboh by caste and their family unit consists of a son and a daughter. They live in dire poverty within a joint family system.

Rukhsana Imran Farooq, was prevented from continuing her education after graduating from the 10th grade, due to financial constraints and was married off. She heard about SPARC’s Vocational Center in Jatoi, and how it was providing free of cost different skills from female social mobilizers in her locality. In a bid to help lift her family out of the cycle of poverty, she enrolled in a Beautician Course from 20-06-2016 to 20-08-2016.

In addition to the course she also availed the provision of daily lectures of Life Skills and Basic Education (LSBE). It was because of these lectures, that she was motivated, granted the confidence and given the inspiration to help alleviate herself and her family from poverty. After completion of her course she expressed a desire to pursue a career to meet her family expenses. Later, she was given the opportunity of participating in the Municipal Committee General Elections. Under the tutelage and mentorship of SPARC’s Vocational Centre’s Project Coordinator, Mr. Naeem Ahmad she contested in the elections and was successful. She was elected as a “General Lady Councilor Municipal Committee Jatoi from the Muslim League Nawaz Group” and is the first lady councilor in Tehsil Jatoi.  Utilizing this opportunity would have remained a distant dream for Rukhsana had she not been given the confidence, encouragement and empowerment that SPARC’s trainings imparted to her.