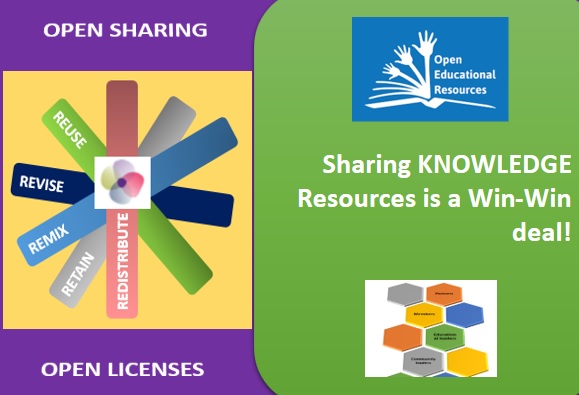 The concept of OER first coined by UNESCO in 2002 in its Forum on Open Courseware and defined the term as “The open provision of educational resources, enabled by information and communication technologies, for consultation, use and adaptation by a community of users for non-commercial purposes” (UNESCO, 2002, p. 24). Later the global movement for OER culminated at the World OER Congress convened in Paris on 20–22 June 2012 by UNESCO, COL and other partners. The resulting Paris OER Declaration (2012) reaffirmed the shared commitment of international organizations, governments, and institutions to promoting the open licensing and free sharing of publicly-funded content, the development of national policies and strategies on OER, capacity-building, and open research (Miao, Mishra, and McGreal, 2016). OER is such a kind of educational resource that are freely available and can be reused, revised, remixed, redistributed and retained (5R’s Framework, David Weily, 2014).

OER is the biggest innovation in teaching and learning both for ODL as well as face-to-face systems. OER got multifold benefits over even the free resources such as legal control to customize the learning resources, improved learning, authentic learning activity, collegial collaboration occurs and demonstration of service mission institutions (David Porter, 2017). Therefore, freely available something may not be an open resource. For example, a highly inspiring video titled “Pearls of wisdom – Great women inspire girls” is freely available online at https://www.youtube.com/watch?v=2D_azsqh1Hs, but it is not OER because it can only be watched or shown only. Why? Because, the video has been released under Standard Youtube License which doesn’t support editing, revising, remixing, redistributing or retaining of the video by the users without the permission of the copyright holder. But if we look at another Youtube video on the GIRLS Inspire webinar titled “Project Management” at https://youtu.be/V7tKYo76lV0, we will see that the video is licensed under Creative Commons Attribution Share Alike License; that means, anyone legally permitted to edit, remix, reuse, redistribute or retain the video as per their need, but the user must attribute the creator (in this case, GIRLS Inspire is the creator). So, the later video is an OER. So it is important to understand the ways to identify the OERs or how to declare our resources as OER. Simply, the legal declaration or the license, usually creative commons attribution licenses, on the resource or platform where the resource belong to is the key. If there is no license or legal permission specified on the resource itself or on the platform where the resource belong to, it is not OER and we are not allowed to customize it without the permission of the creator/copyright holder.

Creative Commons, a US-based non-governmental organization, promotes some open licenses that defines the levels of openness of an educational resource in terms of usage permission and 5R’s Framework. The 6 licenses promoted by Creative Commons are – CC-BY, CC-BY-SA, CC-BY-NC, CC-BY-NC-SA, CC-BY-ND and CC-BY-NC-ND. Usually, the educational resources released under the first 4 four licenses (CC-BY, CC-BY-SA, CC-BY-NC, and CC-BY-NC-SA) are considered as Open Educational Resources (OER). However, the educational resources released under CC-BY-ND and CC-BY-NC-ND are not considered as OER. The resources published under CC-BY license are the most open resources. If we like to have the highest impact or benefit of a shared resource, it should be released under CC-BY license. But one should be careful to assume that every resource SHOULD be an OER. There are cases when a CC-BY-license is not in the best interest of the parties who participate in the venture. One should also look at the rationale behind a resource.  For example, a greatly inspiring video titled “A Tale of Two Marriages” (available at https://youtu.be/qfqJPzBMd0M) shared by Bedari – GIRLS Inspire partner in Pakistan – on Youtube under the Standard Youtube License rather than using Creative Commons Attribution License.  In this case GIRLS Inspire and Bedari has a responsibility towards the authors in the video. This video is a documentary and it contains personal information for which the producer received permission from the authors in the video. The producer can, therefore, not violate the trust of the authors and place a license which will violate their rights if other people use the video and repurpose it. In such a case it is not a good idea to use a CC-BY license (Frances J. Ferriera, 2017).

Sharing a resource openly always adds huge value to the creator as well as to the users. Could you share your experience on sharing resources openly? If yes, what license you are using? If no, what is your future plan? I am looking forward to your contribution in this regard.