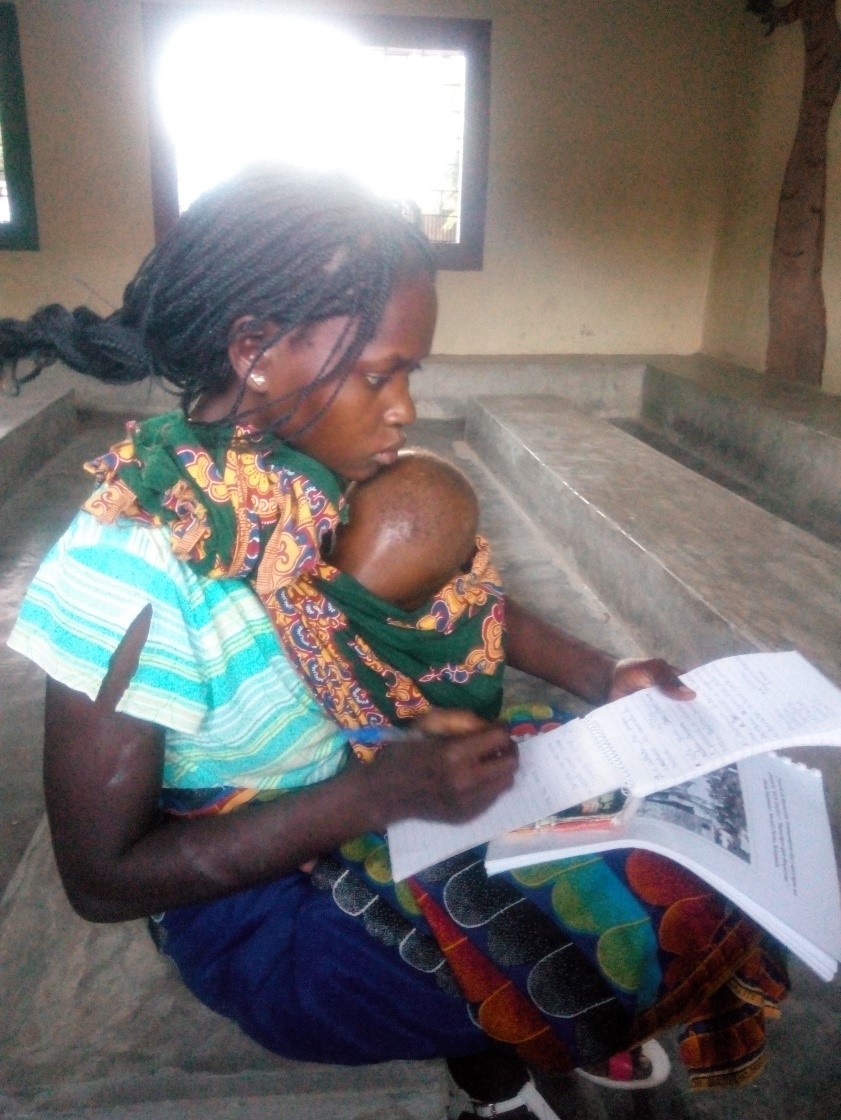 My name is Natália Mitilage Narera. I am 23 years old. I am a mother of two children and we live in Muzuane Baixa suburb.  I separated from my husband and I live alone with my two children.

My unfortunate story began one day when I was 9 years old. A relatively well-off man came and told my parents that I was of school going age. My parents told him that they did not have money to send me to school since they were not well off and were struggling to put my brothers through school.  The man “offered” to put me through school until I completed grade 10 and train as a teacher.  I registered at ADPP primary school, “Ants of the Future” where I did grade one to seven.  In my 7th grade, the ADPP primary school was closed due to government policies on private schools.  I stayed home for 2 years without going to school.  When I was 17 years old, the man who had been paying my school fees, came to my parents and asked them to return all the money and goods that he spent on me during the years I was studying.  Having no money or assets to pay back with, my parents decided to marry me off to this man.

My parents felt indebted to this man for all the help he had given them by paying for my schooling.  They believed that it was a good “repayment” to give my hand to him in marriage.  At first I thought my parents’ idea was a good choice because I longed to return to school. During the marriage negotiations, he was very understanding and promised my parents that he would take me back to school. My parents happily accepted him as their son in law. We got married. In no time after the marriage I fell pregnant with our first child.  After the birth of our first child, my husband’s behavior changed.  He did not allow me to leave the house. He controlled what I ate, how I dressed and none of my former school friends were allowed to visit me or talk to me.  In no time he started being violent towards me, he would beat me up, call me names, humiliate me and worse, denied me money to buy groceries in the house. He would normally do the shopping and bought only the things he wanted, not what we needed in the house. I learnt to improvise and it was very hard. I thought of going back to my parents’ house, but they refused to allow me back and told me to persevere, marriage was like that.  I was caught between a rock and a hard stone. I stayed in an unhappy marriage. After our second child, he started mistreating worse than before. He started cheating on me publicly with young girls from our neighborhood.  Fearing for my health and my life, I left him and took my two children with me.  With the savings I had managed to scrap together, I looked for and found a room to rent.  I had very little and he did not support me and our children.
The day GIRLS Inspire project was introduced in my community was one of the happiest days of my life. I heard that it would be offering training to women and girls the majority of whom were victims of CEFM. I jumped for joy as I believed deep down my heart that this project was an answer to my prayers.  When Maria Amade selected me to be part of the training program, I could hardly believe my luck.  I was asked to select a course of choice and was told that the project will help me secure employment and or start a small business.  This was exactly what I was dreaming of, “to get trained, look for a job and take care of my family!”.  This was my opportunity to give my children a future better than mine.

I could not wait for March, when the course started:  I met new people, made new friends and learnt new skills. The training has built up my problem solving skills, conflict resolution skills and I have learnt how to cook a balanced and nutritious meal using local ingredients. I also learnt a great deal about Sexual and Reproductive Health in particular family planning, prevention of Sexually Transmitted Infections, HIV / AIDS and malaria.  I will use this information to sensitize other girls in my community especially about the dangers of teenage pregnancy, the importance of going to school and delaying sexual debut. With information learnt, I am also able to raise awareness and sensitize community members and especially community leaders on the risks and consequences of Early and Forced marriages on the girl, the family, the community and the nation at wide.  I am confident that I will positively influence the lives of my children who I will raise up differently from the way my parents raised me thinking that marriage is the solution to poverty for girls.  Now as I go for my practical phase of the course, I will commit myself so that I can graduate and get a good job. With my TRIO group and other groups we have planned to start a group savings and loan scheme so that we raise money for projects.  Thank you to the training on setting up savings groups delivered to us by ADPP.
I would like to thank ADPP-Girls Inspire project for the opportunity they have given me to go through this training. I would like to appeal to the project to extend its reach to other communities and other provinces because there are several vulnerable girls who need this opportunity and will benefit a lot from it.