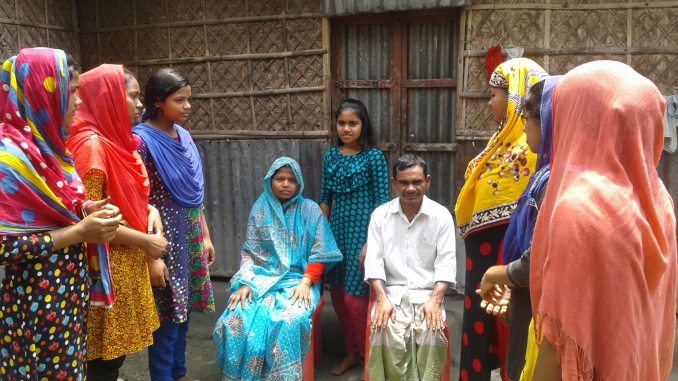 Mariam is the daughter of Mahir Ali and Amina Begum who are poor farmer and housewife, from the village and post office of Rothbazar from Jaldhaka unit in Nilphamari district of Bangladesh. She will appear in Secondary School Certificate (SSC) examination in the next year (2018). Besides her formal and mainstream study she also joins Garments skills training under GIRLS Inspire, CEFM project. She has also attended Awareness Session and Training under the Awareness Program of GIRLS Inspire project. As a result she knows very well about early marriage, dowry etc. and also about the negative consequences of CEFM. Mariam dreams to have a job after completing her study. But suddenly a friend of Mariam’s father bring proposal of marriage of his son for Mariam. The potential groom has a business and good-looking to some extent as described by both the father. Consequently the parents of Mariam consented to the matrimonial proposal without even consulting Mariam in this regard. Later Mariam’s mother let her know. Her mother also tells her about the comparatively lower amount of dowry the father of the potential groom has claimed.

Mariam becomes very worried as it is in one hand an early marriage, on another hand marriage with dowry. After passing some days and nights trying to figuring out the way to stop the proposed marriage, she finds that if her parents can be convinced the marriage can be stopped. Then Mariam goes to the girls of the CEFM project and shares with Parvin, Rumana, Pinky, Yasmin, Laizu and Arfina of the GIRLS Inspire Proejct. The girls then consult among them and plan to go the house of Mariam to convince her parents. Then they go to the house of Mariam in a team and sit with the parents of Mariam and inform them about the horrible consequences her daughter will have if she is married off in this early age and also with paying dowry. Initially the parents of Mariam tell them that it is a very good proposal and if they do not accept it they are afraid that they will not get this type of good proposal in the future. Then the girls tell them that if Mariam gets educated, skilled and aware she will have a bright and self-reliant future and will be able to contribute to the family. The girls lay before them the bigger picture.  Mariam also asserts that she will not marry in this age and she will never be married off with paying dowry. Finally the parents of Mariam can understand about the negative consequences of child marriage and dowry. They promise that they will not marry their daughter so early at age and also with dowry. They regret that they were about to make a great mistake. The parents of Mariam also expressed that they will not let the daughters of their neighborhood married off in an early age and will have a vigilant look on it.

Translated from Bengali to English