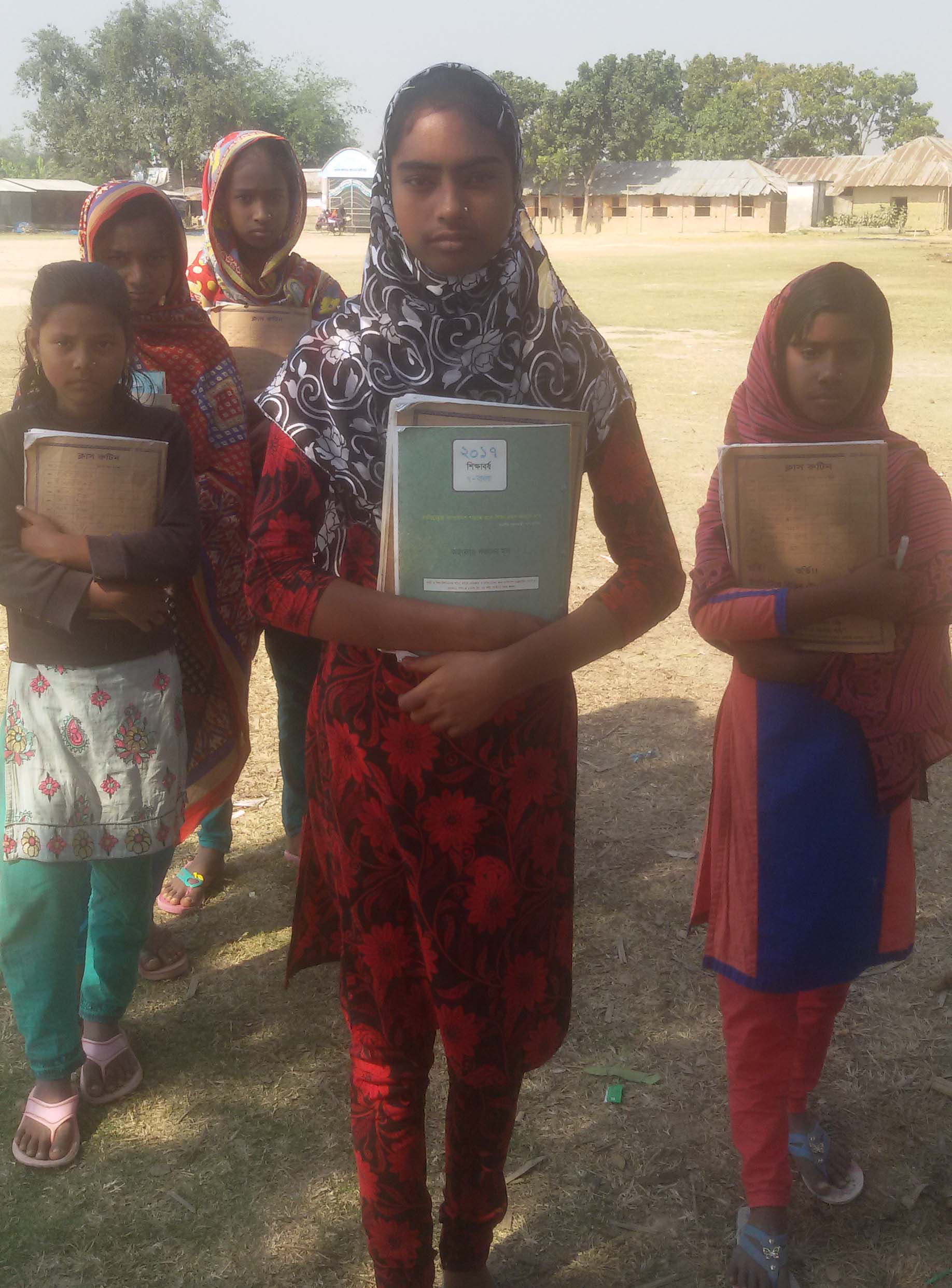 Ria Khatun, a 14 year old girl, studies at Class eight in Bordaichondipur Bailkapara Alim Madrasa. She lives with her parents and two siblings in Elaipur village, Nachole, Chapainawabgonj. Her father Monirul Islam is a farmer and mother Morium Begum is housewife.

Asma Khatun, another 14 year old girl, studies at class seven in Maktapur high school. She lives with her family in same village, Elaipur. Her father Md. Sadimoni is also a farmer. So, naturally the whole family depends on him.

And lastly, Sahida khatun(15 years) an energetic young girl from Bailkapara village, Nachole, Chapainawabgonj studies in class nine. Her father Bairul Islam is also a farmer. She is only child of her parents.

These three young girls were about to be fallen into evil hand of early and forced marriage. Their parents were driven and determined that they would give their daughters marriage for sure even if they (parents) had to give dowry to the grooms’ family. So why did we choose these three young girls’ story to be told? Because, we feel the responsibility to tell their story for the circumstances they have gone through. In most of the developing and under developed countries, the common reason or social trait behind every child and early marriage is poverty. But there’s another reason behind the decision of girls’ parents to give their daughter in early marriage; and that is “Eve Teasing”.  All these three girls are victim of Eve Teasing.

Ria, Asma and Sahida are very gentle and studious students. They always wanted one thing in their life is to learn and learn more. But because of eve teasing, all these three girls’ parents decided to give their daughter in marriage. Even Sahida’s father agreed to give 50,000 BDT dowries to the groom’s family. Parents always think that to save their daughter from eve teasing, marriage is the best and ultimate solution. Parents believe by heart  that once a girl gets married, every problem in her life or related to her will be solved.  Most especially, she will be saved from vicious eve-teasing. So as usual, these three girls’ (Ria, Asma and Sahida) parents fixed up their daughters’ marriages.

The Centre for Mass Education in Science (CMES), from the very beginning, is doing awareness program to fight against this evil twins – Child Marriage and Eve Teasing. In every gender session, the participants and activists of the organization discuss eve teasing, child marriage, dowry and other social anomalies. However, CMES programs are not limited only to the session – we also act to solve the problem. In the action part participants of GIRLS Inspire project determined to stop these three girls’ early marriage. Therefore, on 30th November, 19th & 30th December, Ria, Asma and Sahida, respectively, were saved from child marriage by our adolescent girls with the help of a Local Support Group (LSG) member. At the same time, local government (chairman & UP members) and CMES assured that they would take care of this Eve-teasing matter.

Ria, Asma and Sahida’s parents promised that they would continue their daughter’s education and would not give them away to early marriage. Now these three girls are continuing their studies.

But is this the only measure to stop child marriage or to fight against eve teasing and poverty? Not every girl is as lucky as these three. There are lots of others especially in developing and under developed countries in Africa and Asia who are still becoming victims of Eve teasing and Early /Forced marriage. These are the social thoughts and taboos carried by society that early marriage can save a girl child from Eve teasing, Sexual harassment and oppression. We can’t save our girl child unless our parents and society think that this is not the solution. They must realize that early marriage will put their daughter in more endangered situation. Marriage can’t save her.

So, this is the segment where we have to concentrate and focus more- “Parents” and “Community”. And that CMES is doing from the very onset of its journey.

The Centre for Mass Education in Science (CMES), a national non-governmental organization (NGO) in Bangladesh, is working to take science and technology to the grass root people through appropriate mass education and skills training. CMES has been working for the poor disadvantaged adolescents and youth since 1978 with a vision to empower them economically and socially through education and skills development. Click here to read more about CMES.