Home Real Stories Against All Odds 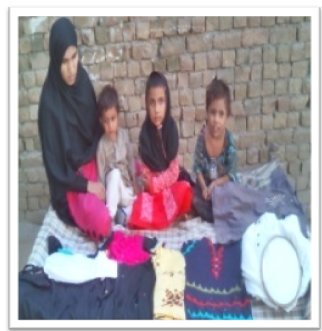 Nasreen Saleem’s life took a turn for the worst when she was forced to marry Rana Arif in 2009 at the age of 14. She wanted to pursue higher education but due to family pressures and financial constraints she was prevented from doing so. Her husband was illiterate and ran his own mobile shop. Living in a joint family system the financial conditions of the household were quite poor.

Her plight was exacerbated further when she gave birth to a baby girl. The social stigma associated with the birth of a female child caused her husband to subject her to brutal torture, which not only continued but increased after Nasreen was blessed with an another baby girl two years later. To add insult to injury, her husband was involved in an extra marital affair and eventually deserted and divorced a pregnant Nasreen and moved to Lahore.

Nasreen moved back to her parents’ house and gave birth to a baby boy. Her husband refused to pay alimony to support their children. Nasreen helplessly filed a case for alimony but it was all in vain. In dire poverty Nasreen was left on her own to support herself and her children.

She heard about SPARC’s Vocational Center at Shehr Sultan which was offering a free course on tailoring. She enrolled in the course and learnt cutting and stitching. Capitalizing on these newly acquired skills she started her own microenterprise by stitching clothes. This provided her with a modest but steady source of income. She now earns between Rs. 250/ to Rs. 1000/- daily.

Nasreen Bibi and her family members are very thankful to SPARC and COL.